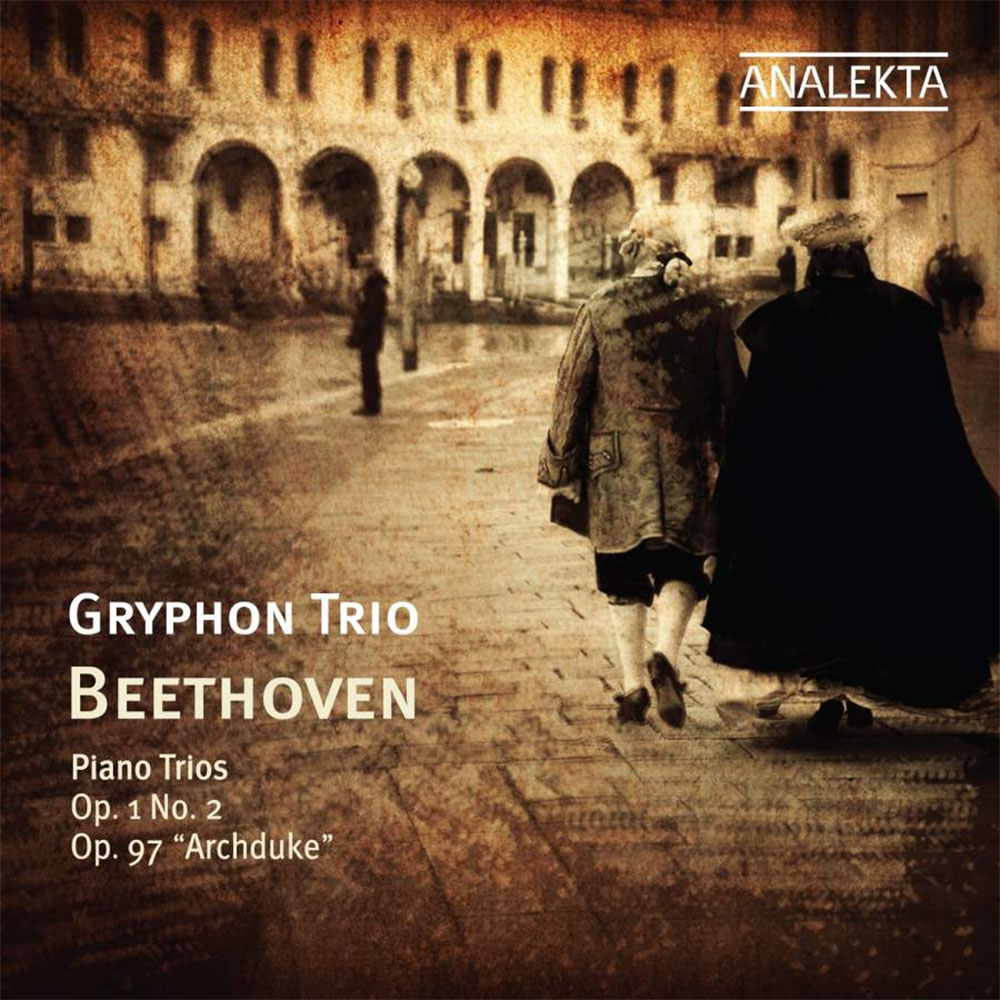 A beautifully recorded and strongly recommended disc. Not to be missed!

Download Booklet
On this recording, the Gryphon Trio is continuing its survey of the great chamber music repertoire, performing two Beethoven’s masterpieces for violin, cello, and piano: the Piano Trio Op. 1 No. 2 and the “Archduke” trio.

In late 1792, just one year after Mozart’s death, Beethoven arrived in Vienna. There, he hoped to make good on Count Ferdinand Waldstein’s prophecy: “with the help of assiduous labour you shall receive Mozart’s spirit from Haydn’s hands”.

But in his first year in the great city of culture, Ludwig van Beethoven (1770-1827) composed nothing of importance. Not even a year of lessons with Haydn, the gatekeeper of the Classical style, bore any fruit. That is, until the great master left for England in January 1794. Only then did his young pupil immerse himself in work. “This year must determine the complete man,” wrote Beethoven in his diary. “Nothing must remain undone.” He dug up some old sketches from Bonn and dashed off new material to produce a set of three piano trios. Each of considerable scope, they demonstrated his absorption of the Classical style (in part thanks to Haydn’s tutelage) and hinted at future innovations.

The second trio’s adventurous key plan (the Largo is unexpectedly in E major) mimics that of Haydn’s contemporaneous “Gypsy Trio”, also in G major. And in its cleverly-disguised recapitulation, the Presto finale contains another Haydnism: with all ears on the piano’s meandering octaves, in slips the principal theme on the violin. If Haydn’s example lurks in the shadows, Mozart’s stands in plain view: the piano central but not dominant; the elegant conversation among instruments; and the cello’s newfound independence, its singing quality cast into relief.

To this artful synthesis of Haydn and Mozart, the aesthetically restless Beethoven grafted elements of his nascent revolutionism. Most obvious is the novel four-movement design, a first for the piano trio genre. The added scherzo brought the genre into the company of the more “serious” and lofty string quartet and symphony. More significant, however, are the new relationships Beethoven forged between the piano and strings. Consider, for instance, his handling of the principal theme in the Op. 1, No. 2 Presto, whose fast, repeated-note motif (introduced by the violin) is as idiomatic for the strings as it is virtually unplayable on the piano. His solution? Change the piano’s version of the motif into a trill figure that, although different, is clearly equivalent. Piano and strings thus share the same material while retaining their individuality. And in a cheeky tour de force, Beethoven finds virtue in necessity: in due course, the violin imitates the piano’s imitation!

Beethoven dedicated his Op. 1 trios, published in 1795, to Prince Karl von Lichnowsky, a Viennese musical patron with exquisite taste. Lichnowsky, who had taken the young composer under his wing upon his arrival in Vienna, treated him like a son. For a time he even lodged him in his own house. And he instructed his servants to serve Beethoven first should they both happen to ring at the same time.

Since Beethoven never obtained an official court position, he depended upon the generosity of Viennese music-loving aristocrats such as Lichnowsky for his livelihood. (In 1800, Lichnowsky began paying the composer a sizeable annuity.) Among Beethoven’s other devoted benefactors was the Archduke Rudolph, a talented amateur musician and younger brother of the Emperor of Austria. Beethoven dedicated his Fourth and Fifth Piano Concertos, and several other important works besides, to the Archduke. In 1809, the Archduke arranged a consortium of aristocrats to fund a lifelong annuity for the now-famous composer. In gratitude, Beethoven dedicated his last piano trio, Op. 97, composed in 1811, to the Archduke.

The “Archduke” trio is not only in the genre but also one of his finest lyrical achievements. Its stately and expansive opening theme immediately establishes the monumental character of the whole piece. Compared to the Op. 1 trios, the string texture is far richer: sustained double-stops in the violin and exquisite pizzicato passages of a scope never before attempted in a trio. Most striking, perhaps, is the carefully-wrought balance between piano and strings, the latter often serving as inner voices. The result is a finely blended sonority that rivals that of the more homogeneous string quartet.

A particularly delicate balance among instruments occurs in the latter part of the first movement’s development. Distant echoes of the principal theme dissipate into a web woven with stealthy pizzicato and gossamer piano staccato and trills. A light breeze then wisps the fragile web into the ether; and in strides the recapitulation, now varied and ornamented.

In this movement—indeed, in the whole trio—Beethoven unfolds the musical argument at a leisurely pace. Ideas float by at a rate that allows each to be individually savoured and mulled over. This is Beethoven at his most reflective.

What follows is not a slow movement but a scherzo, the first such inner-movement reordering in a trio. Cheery and tuneful, the scherzo maintains the work’s relaxed tone by attenuating the expected play on accent and rhythm so typical of the genre. A dark side nevertheless creeps into the central trio: a slithery, chromatic fugato infuses the movement with an element of foreboding.

The ensuing Andante and finale, performed without break, combine into a large expanse that underscores the work’s spaciousness. The slow movement’s serene, chorale-like theme is the basis for four variations. The increasingly rapid rhythmic energy of each variation reaches a climax in the fourth, in which syncopation mingles with a dense string texture and elaborate piano figuration. The complicated texture unravels in the theme’s restatement, now tinged with melancholy, and the movement sleepily drifts off … only to be jolted awake by the boisterous barnyard romp that follows—the kind of earthy rondo finale of which Beethoven was so fond.

Beethoven composed the “Archduke” trio at the tail end of the decade during which his art blossomed into full maturity. In this remarkably productive period he penned a multitude of masterpieces, including the opera Fidelio and the Fifth and Sixth Symphonies. Sixteen years after the publication of his Op. 1, and two years after Haydn’s death, Beethoven’s financial security was assured and his fame spreading internationally. Few had reason to doubt that he had fulfilled Waldstein’s prophecy.