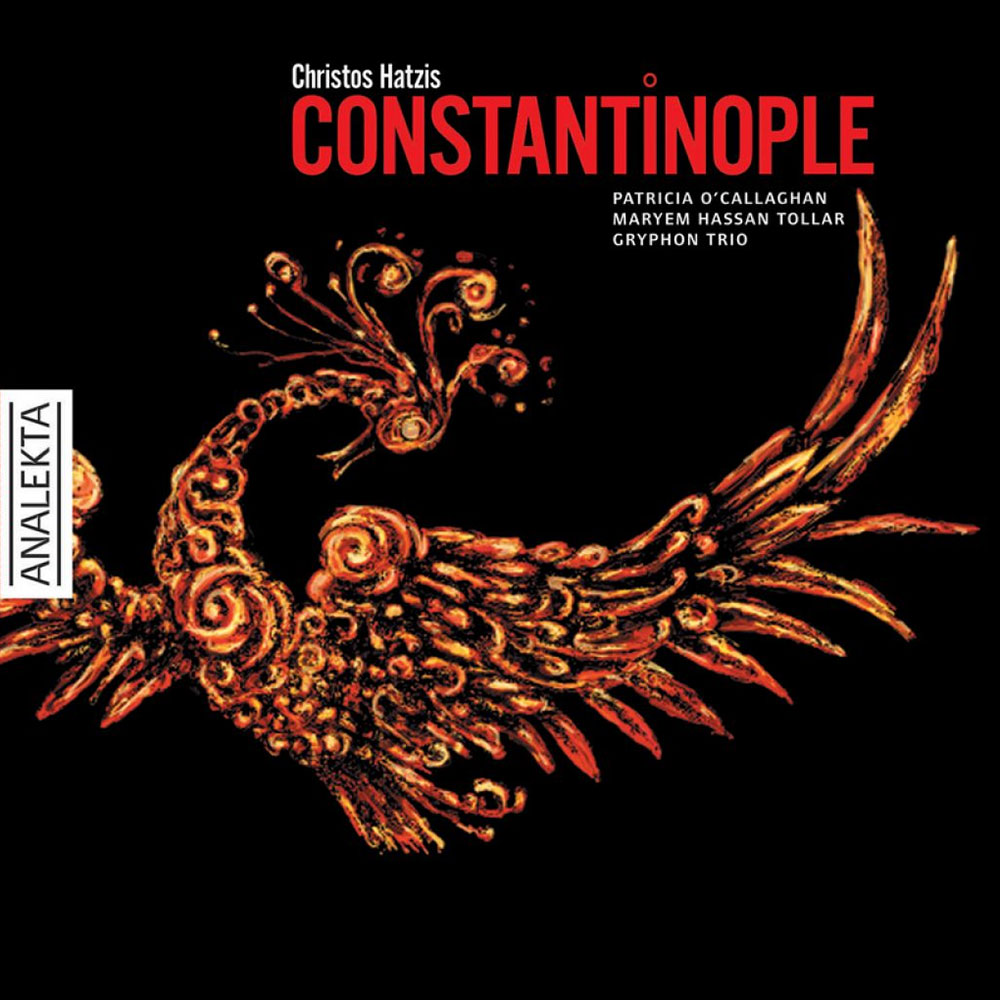 The graceful way in which Hatzis uses and varies repeated melodic cells, allows his pieces to gracefully range across styles, influences and emotional content.

— Classical Album of the Year: Vocal or Choral

A salutary allegory for our own troubled times, Constantinople weaves together threads from East-West, sacred-secular, past-present, real-mythical, high art-popular culture and much more. The strength of its underlying message is reinforced by the way Christos Hatzis challenges our expectation that its music belongs in one genre or another. The piece refuses to be categorised as song cycle, cantata, chamber music or opera. Elements of the work have taken on a life of their own outside its ultimate performance as a piece of music theatre. The music of Constantinople is like a mosaic in which Hatzis juxtaposes bright colours of urban gospel with mediaeval chant, a 19th century Sufi song with bluegrass, Cretan folksong with viol-like writing, and – most exuberantly in “Old Photographs”– a piece of solemn parlour music with the raunchiest of tangos.

At its core, the musical elements comprise piano trio with two singers, from both Eastern and Western traditions. Technology is also central to Hatzis’ thinking. It heightens the impact of the acoustic recording and supplements the piece’s core sonorities with both processed sound and pre-recorded audio. The latter include a Greek singer, Lambros Vassiliou, whose untrained voice seems to encapsulate human fragility and vulnerability and offer some consolation as he intones the fifth movement’s Byzantine folk poem. They also encompass the male voices of the English Chamber Choir whose introduction of a Serbian Easter hymn forms an emotional counterpoint – and ultimately a complement – to the joy of the closing “Alleluia.” Written between the years 1998 and 2000 and revised at least once since then, Constantinople received its first full theatrical presentation on July 29, 2004.

The opening movement, “Creeds,” introduces both singers and music from both the East and West. The Greek Orthodox Easter chant Christi Anesti (Christ is risen) alternates with an improvised meditation, mostly on the words “Ya leyl”, usually used in Arabic improvisation, meaning “The night.” The other words, beginning Tala’al badru (The full moon rose upon us) are those sung by the prophet Mohamed when he fled Mecca and arrived in Medina; in Arabic poetry, the Prophet—or the Beloved—is sometimes referred to as a moon. The cello asserts a claim to the chant, while the piano’s drone evolves into a ringing repeated octave, which is to be a recurring bell-like motif throughout the entire work. The music rapidly takes on the character of a Balkan dance.

With musical material drawn from an earlier, large-scale choral work with the same title, “Kyrie” transfers ritual practice to musical structure. The soprano sings a meditative sequence of increasingly intense utterances of the Kyrie Eleison (Lord have mercy). Melismas on the piano and strings add, by turn, vibrato-less echoes of the cathedral and guitar-like echoes of the nightclub to the texture.

“Odd World” is the first of three purely instrumental movements in Constantinople. Built over a restatement of the first movement’s ringing, bell-like octaves, the music explores angular rhythms and asymmetric phrase lengths, to a point where the exceptional begins to sound like the rule. Many distinctive Hatzis hallmarks, familiar from the choral works and string quartets, are found in this rhythmically driven movement. They include sudden surging crescendos over a rapidly rising scale, contracting intervals using microtones over a diminuendo, and explosive fortissimo statements of a theme.

In complete contrast, “Ah Kalleli” enters a dreamlike world where we appear to travel through time and space. A 12th century Egyptian poem praising the beauty of the clouds is the springboard for Maryem Tollar’s soliloquy with her own electronically processed voice. The setting is by a 19th century Egyptian musician, Muhammad ‘Uthman, though the movement ends on a soulful, bluesy note. In between the vocal solos, the trio introduces fragments of the melody to a stylised, more contemporary lounge treatment, fusing the past and present in a seamless manner.

With “Dance of the Dictators,” Hatzis shows how the manipulation of a straightforward two-bar tune can all too easily take on an ironical twist. The composer relates this movement to his own adolescence under the Greek junta, where cultural nationalism was preached but tangos were danced. It also evokes pictures of the metaphorical dancing that took place as government positions were staked out during the build-up to the 2003 Iraq war.

The sixth and longest movement, “On Death and Dying,” contrasts different views of death, beginning and ending with a Byzantine poem describing the final hours of a legendary hero Vasilios Dighenis. Hatzis sets this poem as a haunting folksong, similar to those from Crete. Its refrain builds as first the soprano then the three instruments join in the lament. At its climax, synthesised snatches from the Verdi Requiem are heard and the music turns to a setting of the Latin Day of Judgement, the Dies Irae. The drama of the music, in which both singers jointly confront the terrors of death amid a soundstage of sound effects, leads to a heartfelt reprise of the folksong setting. The music surrounding this seemingly spontaneous ‘found’ lament echoes human reaction to the period of mourning through the ages, from the ancient sound of viols to the more contemporary sounds of a rock band.

“Old Photographs” provides a release from the tension. Its gently rocking, somewhat introspective melody gradually evolves into the most exuberant of tangos, in a virtuoso display of variation technique. This instrumental number has become the composer’s most performed piece and has been arranged for other combinations of instruments.

The final movement, “Alleluia,” begins by reprising, juxtaposing and combining a number of the musical themes. The cello comments on the Christi Anesti chant, adding more Eastern ‘bent’ notes, while the bell-like theme on the piano appears with it. The violin adds the angular, dancing theme from the third movement. The joyous main theme of the movement is first heard on the piano and is soon taken up by both singers. The positive message of the movement appears to be questioned as the Serbian Easter chant reappears – only to be sonorously woven into the essential message of hope that underlines the “Alleluia.” Similarly as the violin introduces the “Kyrie” theme of forgiveness, quiet reflection gives way to affirmation and to the optimism of the composer’s deeply held belief in the way forward – where all things and themes are considered equally.

Before embarking on the Constantinople journey, Christos Hatzis and the members of the Gryphon Trio envisioned a work that would take chamber music in new directions and bring it to audiences far beyond its traditional realm. The Trio was intrigued by the composer’s ability to utilize the musical sounds and textures of diverse world cultures in his own music. The composer and members of the Gryphon Trio also shared an interest in exploring the connection between music, movement and visual imagery with collaborators from other artistic disciplines.

Hatzis’ overall concept for Constantinople started to take shape in 1998 and the Gryphon Trio premiered the musical “spine” of the work with singers Jean Stilwell and Maryem Hassan Tollar in 2000 under the auspices of the Music TORONTO series. The overwhelmingly positive public and critical response to Hatzis’ new work fuelled a four-year process during which the multimedia theatrical presentation of Constantinople was fully conceived and realized.

Constantinople was commissioned by the Gryphon Trio with assistance from Music Canada 2000 and the Laidlaw Foundation. Special thanks to the family of Michael R. Nickles, Sandra and Jim Pitblado, and the Ontario Arts Council for supporting this recording, to vocalist Lambros Vassiliou and the English Chamber Choir for contributing their performances, and to Roberto Occhipinti, Anthony Crea, Jeff Wolpert, Peter Moore and Julie Fournier for tirelessly bringing it to fruition.