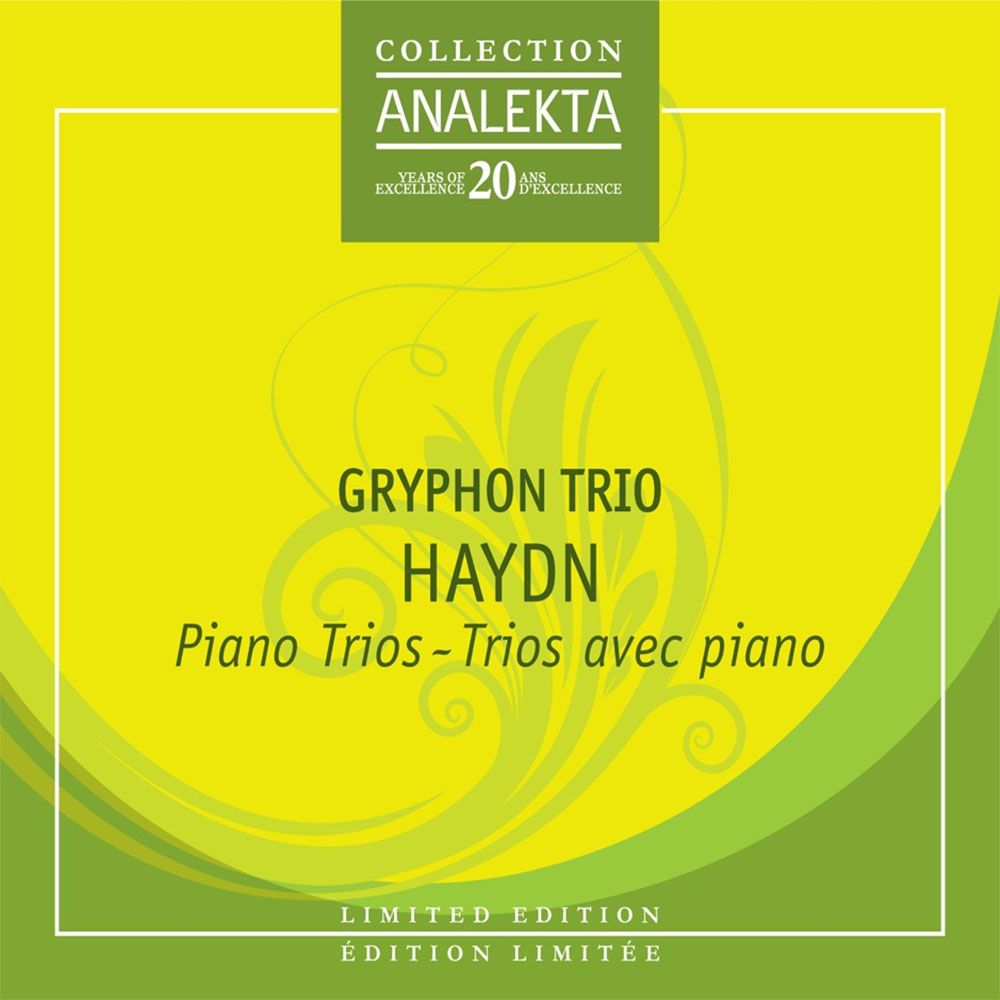 The Gryphon Trio… plays with marvellous delicacy and precision.

Download Booklet
London had already been waiting for Haydn since the 1780s. However, more than an acquired fame, it must have been the excitement offered by an effervescent society along with the city’s rich, stimulating musical life that attracted the composer to the English capital. Proof can be found not only in the profound effect various encounters had on the composer’s musical and personal life but also in the extraordinary musical fantasy and imagination at work in the pieces composed during Haydn‘s two stays in England (January 1791 to June 1792, and February 1794 to August 1795): the twelve “London” Symphonies, the Sinfonia concertante in B-flat major, the Piano Trios, the last three piano sonatas, among others. Through contacts with publishing houses, Haydn also became aware of the numerous possibilities offered by England’s amateur market. Listening to the Trios, it is difficult not to infer that their composition must have seemed a particular challenge for the composer. For it should be clear that these Trios, originally published as “Sonatas for the forte-piano with an accompaniment for the violin and cello” (emphasis mine), were intended for musicians with varying degrees of technical abilities, and hence propose radically different roles for each instrument.

The majority of the Piano Trios were thus composed in London during the 1790s. The Piano Trios, rather than marking a new, “revolutionary” phase in the composer’s development, convey instead a personal desire to indulge in the more playful aspects of composition.

The brilliant octaves in the first movement of Hob.XV:27, for example, or the sparkling and intricate lacework of the famous Rondo all’Ongarese (Hob. XV:25) may have, as motives, some role to play in the formal “outcome” of these works, but it is essentially the pleasure in carrying the propulsive motion and rhythmic vitality that the listener truly shares with the pianist.

In typical Haydnesque fashion, the playfulness also extends to the large scale unfolding of the works. However natural the progress of a movement may seem (the Allegro moderato of Hob. XV:18, or the Allegro of Hob. XV:27 are good examples), its construction is often a fine patchwork of motivic elements. Within the flow of a movement, these elements are manipulated, displaced from their original setting and re-inserted at any given point, creating for the listener a constant sense of being somewhat “lost” within the form. Variation form is also treated with much fantasy: the Andante of the G-minor Trio (Hob. XV:19) uses a typically Haydnesque formula, that is, that of the double variation.

Perhaps the Piano Trio in A major (Hob.XV:18) best demonstrates how well Haydn learned to work within the limitations imposed by the amateur market. If the violin and cello parts are not, from a purely technical point of view, “difficult,” their contribution is no less important. Their role here is essentially contrapuntal in the sense that, instead of simply thickening the texture with needless passage-work, they subtly and discreetly participate in its elaboration.