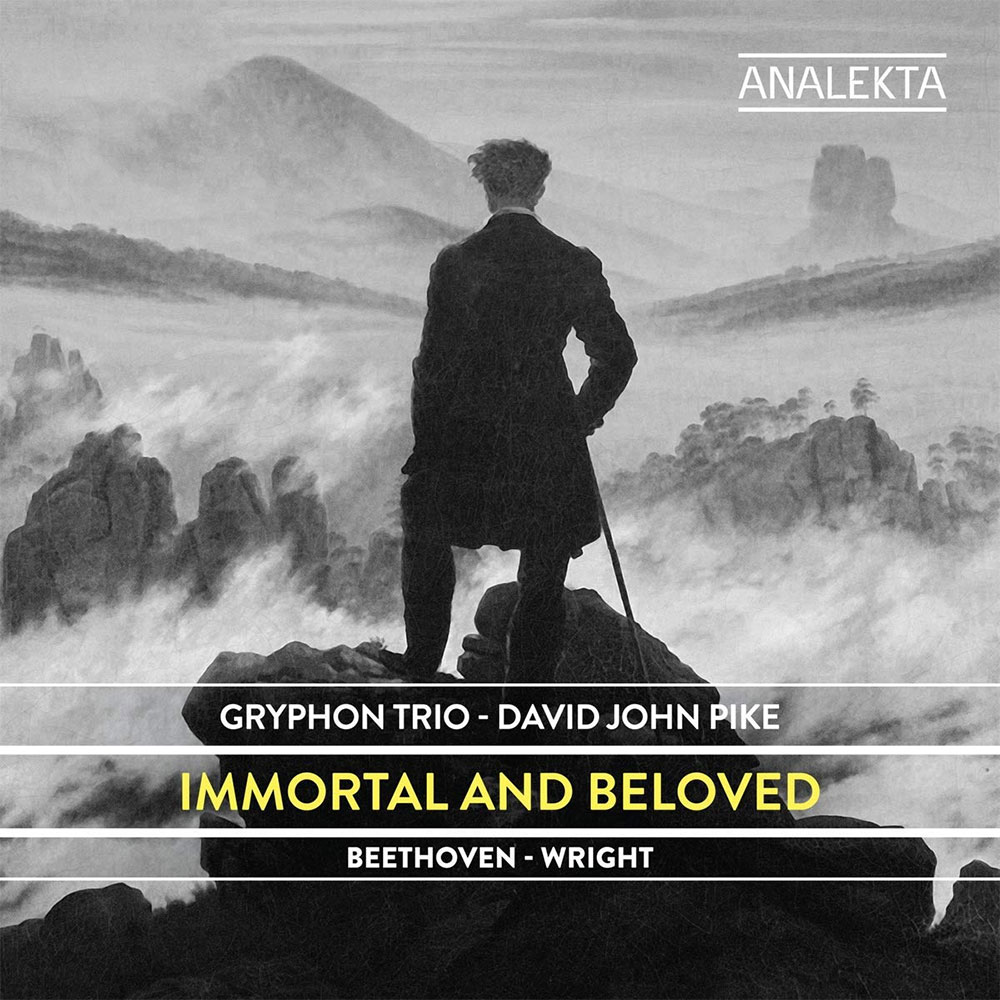 The programme is of course unique, and the settings by James Wright are well worth a hearing.

Two of the three works heard on this recording – the “Archduke” Trio, Op. 97 (1811) and An die ferne Geliebte (“To the distant beloved”), Op. 98 (1816) – were composed during a five-year period that straddles Beethoven’s tumultuous and prolific “middle period” (1803–14) and his increasingly introspective “late period” (1814–25). The third work also involves Beethoven’s passionate outpouring during this period, but of another kind. The chamber art song cycle Briefe an die unsterbliche Geliebte (2012), by Canadian composer James K. Wright, was inspired by three passionate love letters written by Beethoven during the summer of 1812, when he was tending to his health in the Bohemian spa town of Teplitz.

Beethoven’s Piano Trio in B-flat major, Op. 97 – the crowning masterpiece of his cycle of piano trios – was completed in 1811 and dedicated to the 23-year-old Archduke Rudolph of Austria (1788–1831). Rudolph, the youngest of Emperor Leopold II’s 12 children, was one of Beethoven’s most steadfast friends and patrons. Beethoven dedicated no fewer than 14 compositions to the Archduke, including the Archduke Trio, the fourth and fifth piano concertos, the “Hammerklavier” piano sonata, and the Grosse Fuge Op. 133. When the Archduke was enthroned as Archbishop of Olmütz on September 26, 1819, Beethoven wrote the Missa Solemnis in celebration of the occasion. Rudolph, who had studied composition with Beethoven, produced a number of fine works of his own, including Forty Variations on a Theme of Beethoven for piano solo (on the theme “O Hoffnung, O Hoffnung,“ WoO 200).

The first public performance of the Archduke Trio was given at Vienna’s Zum römischen Kaiser hotel on April 11, 1814, by violinist Ignaz Schuppanzigh, cellist-composer Josef Linke, and Beethoven at the piano. A second performance was given a few weeks later by popular demand. Sadly, the challenges to which Beethoven’s increasingly profound deafness gave rise were such that this would be his last public appearance as a pianist. Composers Louis Spohr and Ignaz Moscheles heard these performances and reflected on their experience. “On account of his deafness there was scarcely anything left of the virtuosity of the artist which had formerly been so greatly admired,” Spohr wrote. “In forte passages the poor deaf man pounded on the keys until the strings jangled; I was deeply saddened at so hard a fate.” Moscheles was somewhat more generous in his estimation of Beethoven’s brilliance and creative vigour. While acknowledging that Beethoven’s celebrated gifts as a pianist had become severely compromised by his deafness, Moscheles nonetheless noted that opus 97 was a work of transcendent genius and originality, and that in the composer’s playing he “observed many traces of the grand style of playing which I had long recognized in his compositions.”

Written in April 1816, An die ferne Geliebte (“To the distant beloved”), Op. 98, is considered the first example of a song cycle by a major composer. Carl Maria von Weber wrote the cycle Die Temperamente beim Verluste der Geliebten (“Temperaments on the Loss of a Lover”), Op. 46, later the same year, and Franz Schubert firmly consolidated and established the genre with the publication of his song cycle Die schöne Müllerin in 1823. The six songs in Beethoven’s An die ferne Geliebte traverse a series of poetic themes: (1) Anguished to find himself in the place where he first met his now-distant beloved, the poet takes solace in song and nature; (2) The peaceful valley calms his soul; (3) Having found refuge there, he implores the clouds, the brook, the birds, and the breeze to hear his sorrow and soak up his tears; (4) These things come about, as if by divine intervention, and the poet falls into a deep reverie; (5) Despite the beauty of spring, the season ultimately brings him only sadness; (6) He finally resolves to present these songs to his beloved as an artful token of his love.

As Beethoven lay in his bed in waning health on July 6 – 7, 1812, the great composer authored three passionate love letters to a woman whose identity has, until recently, been veiled in mystery. Discovered in Beethoven’s bedside table shortly after his death in 1827, these intimate letters – undelivered and addressed to “meine unsterbliche Geliebte” (“my immortal beloved”) – have inspired debate and speculation among musicologists for two centuries. The letters are a poignant testament to the tragic fact that an artist so full of passionate feeling had experienced unfathomable pain and longing where love was concerned and was ultimately unable to attain everyday happiness as he pursued his monumental artistic goals.

Dozens of “Immortal Beloved” candidates have been proposed over the years, but during the last 50 years Beethoven scholars have increasingly rallied around the candidacy of the Countess Josephine von Brunswick (1779–1821), a beautiful young Hungarian aristocrat whom the composer first met in 1799, shortly before her marriage to the Count von Deym. When the Count died in 1804, Josephine’s relationship with Beethoven intensified. Sadly, it seems that her social status and parental obligations prevented her from marrying Beethoven, a suitor deemed unsuitable by her family (her hovering matriarch Anna von Brunswick, in particular). Toward the end of the third movement of the “Letters to the Immortal Beloved” cycle, the lyrical opening theme of Beethoven’s “Andante Grazioso in F Major” for piano solo (popularly known as the Andante Favori) can be heard. Beethoven secretly dedicated the Andante Favori to Josephine von Brunswick shortly after the death of her husband, Count von Deym.

Was Josephine indeed Beethoven’s “Immortal Beloved”? We may never know with certainty. However, entries in the diary of Therese von Brunswick (1775–1861), the countess’s sister, provide compelling testimony on the question:

Beethoven, a beautiful mind! Why did my sister Josephine, as widow Deym, not take him as her husband? Josephine’s soul mate! They were born for each other. Maternal affection made her forego her own happiness. The letters found in Beethoven’s bedside table… must have been addressed to Josephine, whom he loved passionately.