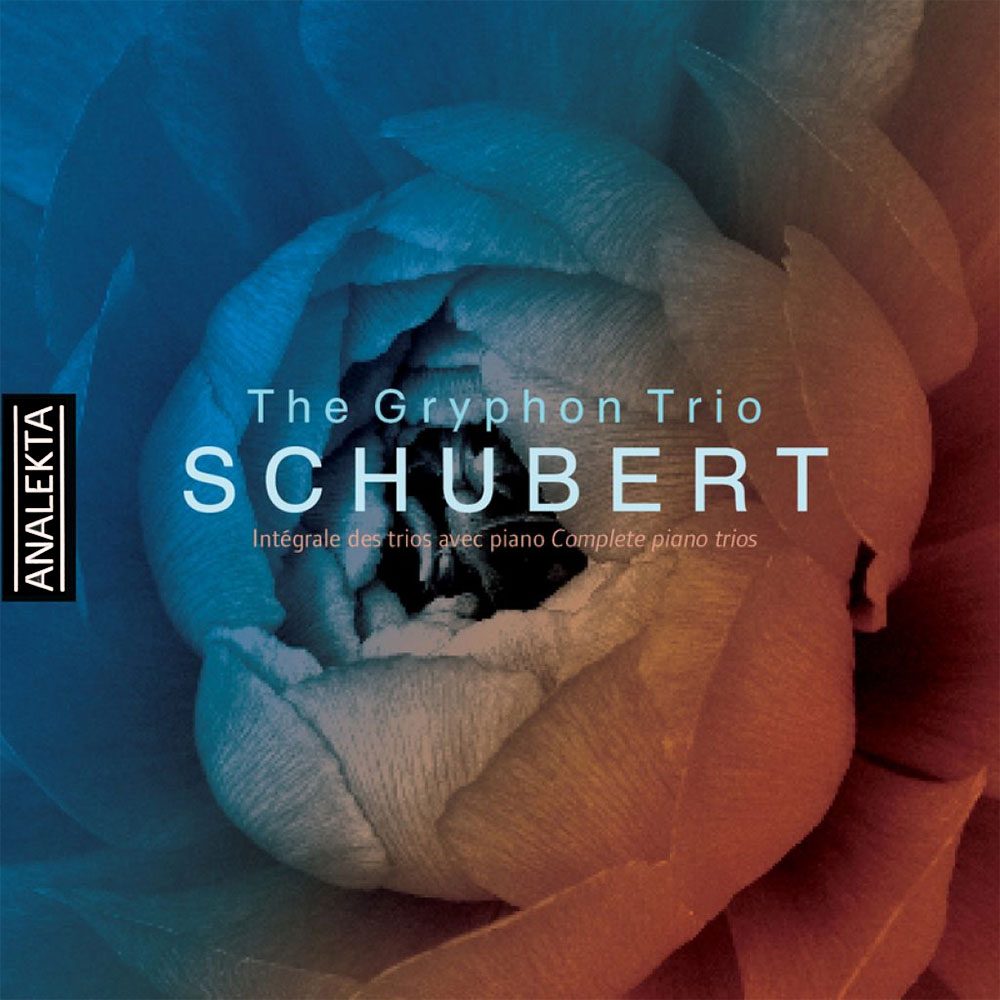 If you’ve never heard any of these standard repertoire works before, the Gryphon Trio’s recordings will certainly satisfy.

— Classical Album of the Year: Solo or Chamber

The Gryphon Trio presents the complete piano trios repertoire by Franz Schubert (1797-1828). With the exception of two one-movement pieces—a very early experimental work (D. 28) and a late “Notturno” (D. 897)—Schubert wrote only two complete trios for piano, violin and cello (D. 898 and D. 929); however, they quickly came to be considered pinnacles of the genre.

In 1812, when he was 15, Schubert’s mother died suddenly at the age of 55. Two weeks later, Schubert began private studies in composition and theory with Antonio Salieri, the famous Viennese Court Kapellmeister. Salieri’s rigorous lessons in counterpoint, fugue and the setting of Italian texts were not only a timely distraction for the grieving adolescent, but also quickly improved his technique. And when his voice broke that summer, abruptly ending his career as a chorister, he had more time than ever to compose. During the prolific months that followed, he composed a one-movement sonata for piano trio (D. 28), the first time he combined piano with strings. A charming Allegro movement imbued with Mozartian elegance, it would be Schubert’s only work in the genre until his final year.

Composed in 1827 around the same time as his two great piano trios, the one-movement Notturno (Nocturne) is believed to be the discarded slow movement for the B-flat Trio (D. 898). Many have therefore dismissed the movement as a “reject”. But others consider it a work of great beauty, some hearing in the continually intertwined violin and cello melody a deeply felt love song, almost erotic in its trance-like unfolding. Others have even suggested that the movement became the seed for the Adagio in the String Quintet in C. The movements’ similarities are striking: a serene slow-moving melody in close spacing framed by outer parts (in the Notturno, by the piano); a turbulent central episode in the flattened-second scale degree; the use of pizzicato; and a coda that recalls both tranquil and stormy material. The case is compelling and makes the Notturno—an abandoned sketch for one work and the basis for another—a unique record of the creative process itself.

Schubert likely composed his two monumental piano trios one shortly after the other in late 1827 although it remains unclear in which order. The B-flat Piano Trio, today known as the first, opens with a jubilant Allegro moderato. Schubert’s song-writing shines in the lyrical second theme, introduced by the cello, the subject of emotional outpouring in the development. The sonata-form movement features a curious anomaly: the recapitulation begins in the “wrong” key (G-flat); it is only when the piano restates the first theme in the tonic (B-flat) that our expectation of symmetry is satisfied. The ambiguity thus toys with our expectations: does the recapitulation begin with the return of the first theme; or with the return to the home key?

Again the fountainhead of lyrical expression, the cello introduces the Andante un poco mosso’s gorgeous songlike theme, taken up by the violin. After a decorative middle section, Schubert unveils a final transformation of the initial melody: it now modulates in midstream and not just between restatements.

The scherzo is a staccato Allegro that resembles the scherzo from Schubert’s Trout Quintet (the tune is upside down). In the Trio, string melodies float above a piano waltz rhythm missing its downbeat; the singing strings and discombobulated piano navigate independent metrical courses, yet magically stay together.

Schubert called the finale a rondo but it may be better understood as sonata form in which the roles of development and recapitulation overlap. Marked Allegro vivace, it reasserts the buoyancy of the first movement, although tremolos and bell-like tones in the piano add an air of mystery. The main theme is derived from Schubert’s song “Skolie” whose text reads: “Let us, in the bright May morning, take delight in the brief life of the flower, before its fragrance disappears.” A dance-like tune, introduced by the violin, offers an amusing diversion; when it returns near the end in the piano’s high register, the movement seems about to fade away like an unwinding toy drummer. But Schubert saves a last exuberant breath for the Presto coda.

Schumann considered Schubert’s two great trios a complementary pair: the B-flat, more lyrical; the E-flat, more robust. The much longer E-flat Piano Trio lives up to its weighty reputation from the outset. The first movement, an Allegro, opens with a bold motif in unison, not heard again until the end of the development. The second theme is peaceful and the focus of the development, an entire section of which is repeated, not once—but twice!—in different keys.

In the Andante con moto, over a quasi funeral-march rhythm, the cello presents a haunting melody based on the Swedish song “Se solen sjunker” (The sun is going down). In obvious role-reversal, the piano, in simple octaves, takes the theme next, accompanied by the slow march in the strings—in Schubert’s hands, even the obvious harbours beauty. The rondo’s episodes introduce stormy elements, intermittent outbursts that punctuate a general calm.

The Scherzo is a contrapuntally elegant Allegro moderato whose 27-bar canon continues in close imitation. The concluding Allegro moderato carries a relaxed theme into a rhythmically propulsive landscape of frequent modulations and metre changes (from 6/8 to 2/2 no less than five times).

What lends cohesion to this panoramic work is the cyclic element. The Swedish song twice makes an appearance in the finale—in the development and in the extended coda—and both times in the cello. Another more subtle cyclic element is the four-note repeated motif present in all movements: as the B-minor modulating middle subject (first movement); the march-like accompaniment to the song (second movement); the canonic theme (Scherzo); and throughout the 2/2 sections of the finale.

Years later, Robert Schumann hailed the E-flat trio as “an angry meteor blazing forth and outshining everything in the musical atmosphere of the time.” It was the only work by Schubert published outside Austria during his lifetime. When asked by his publisher to whom the work should be dedicated, Schubert replied: “This work is to be dedicated to nobody, save those who find pleasure in it.”