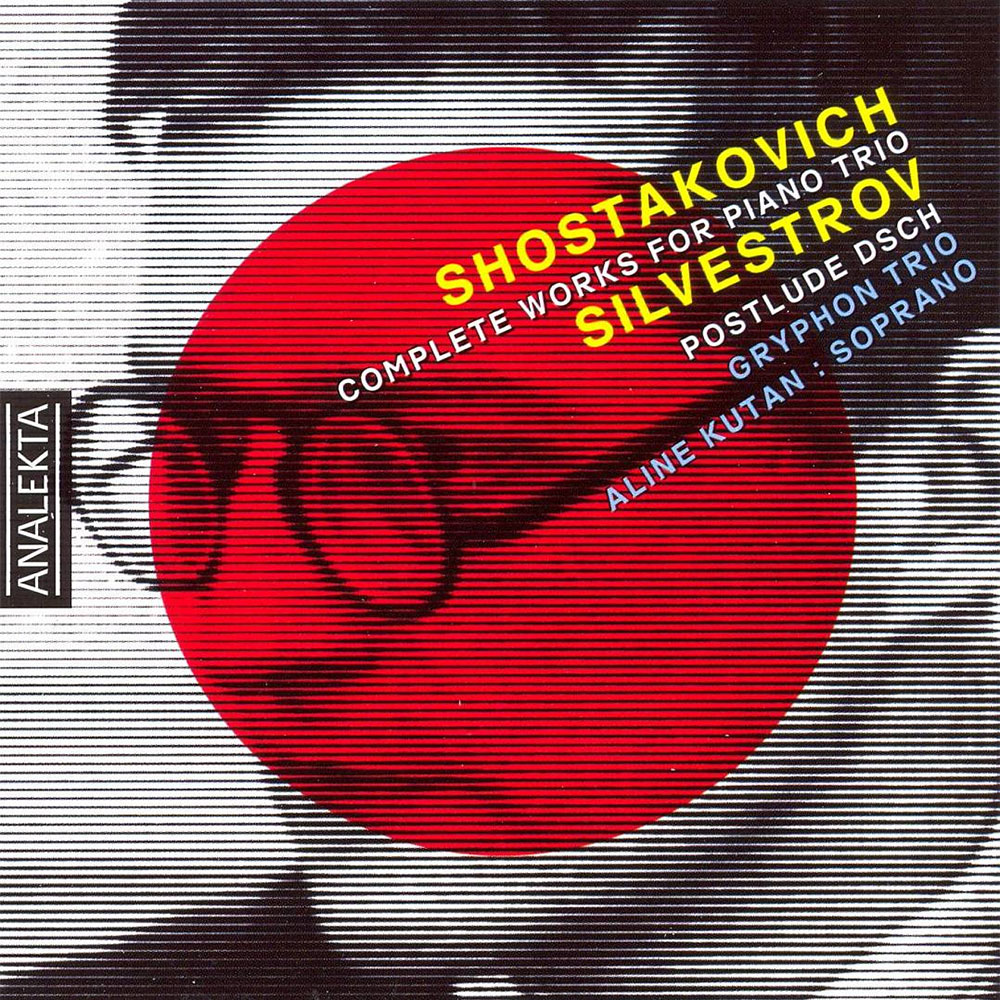 I would recommend the excellent Gryphon Trio to those who find most Shostakovich over-emphatic.

This recording brings together Shostakovich‘s only three works for, or with, piano trio. They span his entire career and thus offer a snapshot of his evolving style from teenage student to international celebrity to revered master. But their differences are outweighed by a common musical purpose: the search for meaning and expression. “The capacity to create music that transforms the listener, having heard it, into a different person,” writes scholar Laurel Fay, “…was, in Shostakovich’s view, the loftiest aspiration any composer could harbour.”

Shostakovich’s commitment to communicating with a broad public, combined with the aesthetic demands of the Soviet state, ensured that unlike many of his contemporaries in the West, he did not join the ranks of the avant-garde “innovators.” But he was not a conservative—he repudiated those who slavishly imitated past masters. In a 1968 interview, he explained his attitude toward modernist techniques: “To a certain extent I think the formula ‘the end justifies the means’ is valid in music. All means? All of them, if they contribute to the end objective.”

At around this time, Shostakovich began to include in his compositions elements of one of these complex systems, the twelve-tone system (a method of atonal writing in which all twelve chromatic tones are considered equal)—but always in a tonal context. One of the first such works is his 1967 song cycle Seven Verses of Alexander Blok, Op. 127, for soprano and piano trio, in which he adapts the inherent remoteness of twelve-note themes to depict a torrential downpour (“Tempest”) and emotional disembodiment (“Secret Signs”). But in this song cycle, no one “system” accounts for the emotional space that is at once plaintive, stark, pensive, mysterious and even romantic. In fact, what contributes the most to the work’s powerful effect is its astonishing economy of means: the full ensemble does not accompany the voice until the very last song; when instruments do accompany, they are often assigned long rests; and combined melodic lines proceed in stark contrapuntal textures of crystalline clarity—even the piano is often reduced to a single melodic line in octaves. The result is simplicity of texture that mediates the fine line between bleakness and serene beauty.

Composed some twenty years earlier, in 1944, the opening of Shostakovich’s Piano Trio No. 2 in E Minor, Op. 67, shares a similar austerity: a three-part canon, with its cello harmonics, muted strings and low piano octaves, evokes an eerie atmosphere. But in contrast to the mostly contemplative Seven Verses, the Trio covers more varied ground: in the second movement is nestled a waltz; the Passacaglia, a mournful elegy, is built on a slow eight-chord ostinato in the piano; and the rondo finale is in a Jewish folk idiom.

Three factors have led many observers to assign meaning to this apparent eclecticism. The first is internal to the music. The cyclic return, in the finale, of music from prior movements—the passacaglia (third movement) and the canon (first)—hints at a narrative. The two other factors are external: one private, the other public. Several months into the composition of the Trio, Shostakovich’s close friend, the influential historian and art critic Ivan Sollertinsky, died suddenly of a heart attack. “I am indebted to him for all my growth,” wrote Shostakovich, and dedicated the Trio to his mentor. The other external factor concerns the Red Army’s liberation of Nazi death camps at Treblinka and elsewhere that came to the composer’s attention as he completed his Trio. He was particularly horrified by stories that SS guards had made their victims dance beside their own graves, an image that no doubt influenced the finale’s grotesque “dance of death.”

But as tempting as it is to ascribe a definite programme to the Trio, the work ultimately resists such a reading. After all, there are no words, and instrumental music is a notoriously imprecise conveyor of rational thought. Is it a musical monument for an individual? Or a public memorial for the victims of fascism? Could it be both—or neither? Is it just deeply moving music? If nothing else, the Trio prompts the listener to ponder such questions.

The much smaller scale of Shostakovich’s Piano Trio No. 1 in C Minor, Op.8, composed two decades earlier (1923) while he was still a student at the St. Petersburg Conservatory, clearly does not pose such grand questions. But its frequent tempo and mood swings do seem to document a narrative of sorts, however crude, perhaps of adolescent angst (he was 17 when he wrote it). The composer’s trademark modes—brooding, mischievous and romantic—are all present, and alternate freely and abruptly. Yet, in the end, the precise meaning behind their juxtaposition remains elusive.

In 1979, four years after Shostakovich’s death, Solomon Volkov shocked the musical world by publishing Testimony: The Memoirs of Dimitry Shostakovich in which he turned the accepted image of the composer on its head, from a stalwart socialist supporter to a secret dissident. The following year, however, Laurel Fay published a well-researched rebuke that challenged Volkov’s scholarly credibility and the memoirs’ authenticity. These were the opening salvoes of the so-called Shostakovich “wars.”

But alongside the scholars who have “decoded” his work, and others who have debunked the decoders, there have also been musicians and composers eager to interpret Shostakovich’s legacy on its own terms. Among these is the Ukrainian composer Valentin Silvestrov (b. 1937) who, in 1981, contributed Postlude DSCH for soprano and piano trio, the first in a set of three postludes. The abbreviation in the title is a reference to Shostakovich’s famous musical monogram D-S-C-H (he was delighted that his initials, D. Sch., corresponded to the notes D-Es-C-H in the German spelling, equivalent to the pitches D E-flat C B in ours).

Silvestrov quotes the DSCH monogram as a musical tribute to the Russian master. The monogram, not immediately recognizable because of octave displacement and pointillist distribution, emerges more audibly when repeated in the soprano, piano bass and violin. Draped in pure major chords, this dreamy meditation produces an elegiac soundscape. In the spirit—though definitely not in the style—of Shostakovich, Silvestrov’s Postlude also begs questions about its own meaning, and is thus a poignant requiem for arguably the twentieth century’s greatest composer.