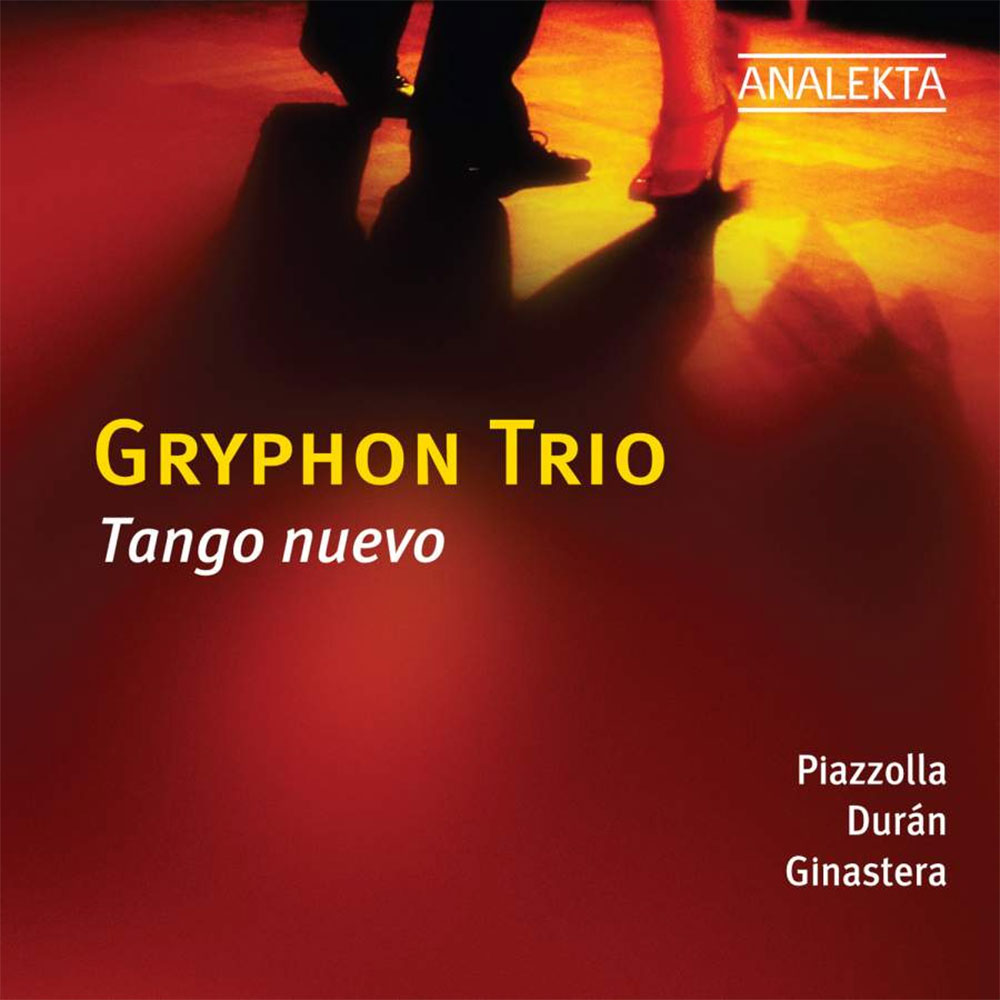 These arrangements (and performances) make a string trio seem like a completely natural medium for the music’s feral energy.

The tango: a lascivious dance born in the bordellos of Buenos Aires. Or so goes the legend. There is some truth in it but the real story of how the genre came to define the Argentine identity is far richer. In the late nineteenth century, European immigrants, mainly from Italy and Spain, flooded into Argentina hoping to prosper from the agricultural boom. Many were unable to buy land, however, and settled instead in the working-class neighbourhoods of Buenos Aires. Homesick, and often poor and unemployed, these immigrants, along with the port city’s natives, gave expression to their daily struggles by creating a new hybrid art form.

The tango’s musical sources were as varied as its creators: a blend of Italian Mediterranean culture, Spanish flamenco and the Cuban habanera. Even its flagship instrument, the accordion-like bandoneón—invented in Germany as a portable organ for church services—was an unlikely protagonist. By the 1920s, Carlos Gardel, the “king” of tango, had popularized the genre’s sung form; and the tango’s acceptance by Parisian high society helped spread its popularity worldwide.

But even a vibrant tradition risks stagnating if not renewed. And sometimes what is required is an outsider’s fresh perspective. The burden to stop the “tango from becoming a relic of the past”, observed pianist and conductor Daniel Barenboim, fell on the shoulders of Astor Piazzolla (1921-1992).

Born in Mar del Plata to parents of Italian descent, Piazzolla’s family moved to New York City when he was just four. By eight he was playing the bandoneón. As a teenager, he returned to Argentina and within a few years landed a position in Aníbal Troilo’s famous tango orchestra. Soon bored by a genre that he felt had reached an impasse, in his spare time he cultivated his long-held interest in classical music by composing a substantial body of “serious” music. In 1954, anticipating a career in classical music, he went to France to study with the world’s most famous composition pedagogue, Nadia Boulanger. The encounter changed his life—and the history of the tango—forever.

Boulanger considered Piazzolla’s music to be well-crafted and noted its debt to Ravel, Stravinsky and Bartók. But she thought it lacked spirit. When she learned that Piazzolla composed and arranged tangos for a living (he was ashamed of this), she asked him to play one. He reluctantly obliged. Boulanger then took his hands in hers and said: “Astor, this is beautiful. Here is the true Piazzolla—do not ever leave him.”

Calling this epiphany “the great revelation of my life”, Piazzolla returned to Argentina where he founded his famous Quintet (bandonenón, violin, piano, electric guitar, bass), the principal vehicle for his nuevo tango, a new style that incorporated the dissonant harmonies and cross-rhythms of twentieth-century classical masters. In the process, he took the tango off the dance floor and into the concert hall.

Piazzolla’s take on tango, however, met with fierce resistance from traditionalists. After one concert, an audience member asked snarkily: “Maestro, why don’t you play a tango?” The question haunted him throughout his career. In his memoirs, he even claimed to have once been beaten in the streets by a disgruntled member of tango’s old guard.

Among the many pieces that Piazzolla wrote for his Quintet is Las cuatro estaciones porteñas (The Four Seasons of Buenos Aires; “porteño” means “of Buenos Aires”). All four pieces bristle with energy, grating dissonances and percussive punch. Slow interludes provide contrasting moments of nostalgic lyricism. The fast-slow-fast scheme (except in Invernio porteño (winter) where it is reversed) is perhaps the most significant reference to the work’s famous predecessor, Vivaldi’s Four Seasons. Otherwise Piazzolla’s seasons, which were not even conceived as a set, have little to do with Vivaldi’s in either style or concept. Whereas Vivaldi’s are pastoral and literal (dogs barking, birds twittering and storms brewing), Piazzolla’s are urban, tied to a specific locality and depict each season’s essence rather than its literal sounds. Piazzolla wrote Verano porteño (summer) first, in 1965, and completed the rest by 1969.

Even more loosely interrelated are the pieces that make up the “angel” series, four of which appear on this recording (composed between 1957 and 1965). The haunting Milonga del ángel (Milonga of the Angel) is one of Piazzolla’s signature pieces: soothing, yet tinged with yearning, it creeps under the skin. Muerte del ángel (Death of the Angel) begins and ends with a furious fugue that does as much to invigorate the tango as to breath new life into the old baroque form. The steady, descending chromatic bass line in Resurrección del ángel (Resurrection of the Angel) recalls the baroque symbol of lament. Tango del ángel (Tango of the Angel) is alternately driving and mellow.

Piazzolla was also much in demand as a film composer. In 1985, he composed the music for the award-winning El exilio de Gardel by the leftist Argentine director Fernando Solanas, who, despite his disapproval of Piazzolla’s “questionable opinions” about the brutal military dictatorship in the 1970s, recognized that Piazzolla “succeeded in expressing the anguish, melancholy, nostalgia and depression so typical of the man from Buenos Aires”. Oblivion, with its soaring lines and gently pulsating accompaniment, is the highlight of the score to another film, Enrico IV (1984), by Marco Bellocchio after Pirandello’s play.

While working in the cabarets of Buenos Aires before his studies with Boulanger, Piazzolla honed his craft by taking composition lessons with Alberto Ginastera (1916-1983), an Argentine composer who became famous for his special blend of folk music and modernist techniques. Ginastera’s Two songs for voice and piano, Op. 3 (1938) include the widely transcribed Milonga whose sighing, plaintive melody unexpectedly turns cheerful. (The milonga, a traditional Argentine song genre, was another key source of the tango.)

In his own way, Juno award-winning Cuban-Canadian composer and pianist Hilario Durán (1953- ) has revisited old forms from his native land. His fantasy-like Contradanza is based on the eighteenth-century Cuban collective dance of the same name whose ancestor was the populist English country dance. Cuban musicians enriched the form by adding the habanera rhythm. Then in the late nineteenth century, the contradanza evolved into the first entirely Cuban dance form, the danzón, which became Cuba’s national dance. In New Danzon, Durán refreshes the genre with heartfelt lyricism, jazz harmonies and a sophisticated playfulness.